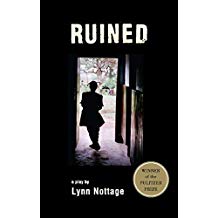 I was totally unaware of Nottage and her two Pulitzer Prize winning plays until I recently read about them and decided to read the plays.  Lynn Nottage is a graduate of Brown and the Yale School of Drama, a MacArthur grant winner, and a much honored African-American playwright.  In addition to her Pulitzers, she has won Obies, New York Drama Critic Circle awards, and a Tony nomination.  This play is no walk in the park.  It tells the story  of Mama Nadi, the madam, and her ‘girls’, Josephine, Salima, and Sophie who try to survive in a bordello in the Congo in the midst of a civil war.  There are the rebel and Government generals and soldiers, a Lebanese jewel dealer, and an alcoholic salesman who loves Mama.  All of them are thrown into the chaos and violence of the war, but the women are especially at risk and brutalized.  Rape as a weapon of war is the theme of this play, and Nottage and her director, Kate Whoriskey, traveled to Africa to interview rape victims before writing and directing the play.  The work is stark, sobering, and depressing as we see human beings at both their best (as when Mama gives up her most valuable diamond to pay for surgery to Sophie’s damaged genitalia) and at their worst (as when Mr. Harari takes the diamond and vanishes). I imagine that people who have seen the play in person emerge from the theater, shocked and shaken.  A powerful work that is even more important for our at this #me.too, immigration,  and Donald Trump time than it was in 2009.