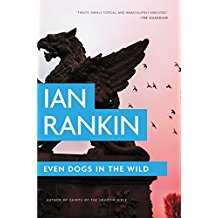 This was my first Ian Rankin novel featuring John Rebus, newly retired Inspector Detective with the Edinburgh, Scotland police.  One of 22 Rebus books, this one was suggested by a By the Book interviewee in a recent NYT Book Review.  The story moves along briskly and with enough suspense and details to keep this reader engaged.  The book begins with the murder of Lord Minton, formerly Scotland’s chief prosecutor, and then the murders begin to pile up until Rebus and his official police associates, Siobhan Clarke and Malcolm Fox begin to put the pattern together.  The unusual title comes from a song by The Associates which one of the characters hears while riding naked and beaten in the trunk of a car—but never mind.  I won’t be a spoiler and divulge the ending or the murderer.  I’m not sure I’d recommend this book very heartily.  It’s good, solid detective writing, but I still prefer Connelly, Child, and Leon to Rankin.