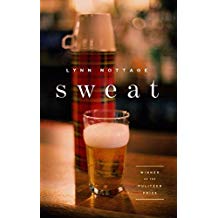 Nottage again takes the reader/audience member on an emotionally shattering journey.  Instead of the Congo as in Ruined, we find ourselves in 21st century Reading, Berks County, Pennsylvania where the local mills are shutting down or demanding that workers take deep cuts in pay and benefits.  The globalization of manufacturing, the increasing number of immigrants willing to work for less pay, the lack of opportunity for those without a college education, the blight of drug addiction and alcoholism, the poisonous undercurrents of racism and nationalism, the age old battle between profit making businesses and unions representing labor, and the violence that results from all of the above are etched into the reader’s consciousness by Nottage’s sparse and powerful dialogue in just two bare settings—a parole office in 2008 and Stan’s Bar in 2000.   The time shifts back and forth from 2008 to the events of 2000 and the reader is oriented to every scene as it is introduced with highlights from the day’s national and local news and the daily temperature. A particularly stark scene is introduced by a newspaper headline about the $700B bank bailout in 2008 juxtaposed with the damage that the Great Recession did to working people who won’t receive any government help.  This is a disturbing and important play leaving the reader and audience with emotional turmoil, anxiety, sadness and few answers.  Nottage fulfills the artist’s role of raising the issues without the obligation to resolve them.  Eager (though worried) to see this in production.  After 129 performances on Broadway last year, the play is touring 18 Rust Belt cities and has just been extended in its London run.  In addition, Nottage has created a multi-media production entitled This is Reading which played at an abandoned railroad station in the eponymous town.  Super creative individual!