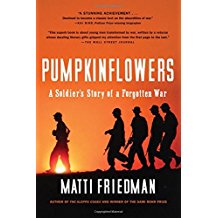 Friedman, a Toronto native who made aliyah to Israel as a high school student relates the story of his three years in the Israel Defense Force during the occupation of southern Lebanon.  Stationed for four months twice a year on a hill called the Pumpkin, he experiences first-hand the boredom and the terror of confronting the guerillas of Hezbollah during this ‘forgotten’ war.  He sees friends shot, blown up, maimed and killed and describes his experiences in vivid prose, especially the battle scenes.  He places the 1997-2000 period in the context of the Israeli state’s fight for survival, and his description of the Four Mother’s movement to force the government to withdraw from the Lebanon security zone is especially well done.  At the end, however, what comes through is a deep sense of pessimism over the future of peace in the Middle East. Though short on political and diplomatic detail and sophistication, Friedman provides a front row seat to the reality of life in a hostile part of the world.