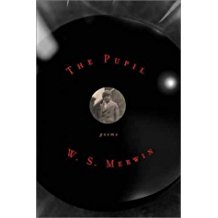 Merwin, the recipient of nearly every major poetry prize over his 89 year old life, has written a dense, somewhat cryptic collection of one page poems, many of which flash with his characteristic deep sense of beauty and time.  The title is a play on words, combining the vision of the eye with the learning of the student.  His love of nature, especially his home in Hawaii, and its subtle changes of the hour and the season.  The lack of capital letters and punctuation made this a bit more challenging but after a few poems, one gets the idea and settles into defining one’s own line breaks, sentences, and phrases.  Two particularly beautiful poems are Worn and The Veil of May.  Worn:  “ Then what I come back to now is/an age that I could not have seen/until this time and as others I knew did not live to see it/but where it is at this moment/in spring when the morning shows me/ again what I thought I had known/for so long the river taking/its time the stones lifted out/of the ground and set into walls/for a while waiting to return/the tools passed from hand to hand/keeping the shine of the handles/the hollows of the stone doorsills/polished as though they were daylight/so that I step over them to/turn into the time I go through” Loved the stones waiting to return to the ground and the shine in the handles of the tools!  The Veil of May:  “No more than a week and the leaves/have all come out on the ash trees/now they are more than half open/on the ancient walnuts standing/alone in the field reached up/through the mute amazement of age/they have uncurled on the oaks from/hands small as the eyelids of birds/and the morning light shines through them/and waits while the hawthorn gleams white/against the green in the shadow/in a moment the river has/disappeared down in the valley/the curve of sky gliding slowly/from before not seeming to move/it will not be seen again now/ a while from this place on the ridge/but over it the summer will/flow and not seem to be moving.”  Totally love the picture of the various trees leafing out and especially the Hawthorn, a tree we planted in VT last year to celebrate Simon’s birth. Also, love the idea of the river which won’t be seen due to the leafy trees, but will still be there for summer to ‘glide over’.