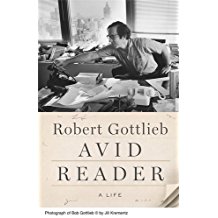 I loved this book!!!! Gottlieb, born in 1931 into a middle class, NYC, Jewish family, was an avid reader from the get go, devouring childhood and middle reader literature before heading off to Columbia and then Cambridge, UK. He returned and through a series of fortuitous events, ended up as a major editor at Simon and Shuster in his mid-20’s.  The story of his career as an editor and publisher through S&S (1955-1968), Knopf (1968-1987), The New Yorker (where he replaced William Shawn who had replaced the founder, Harold Ross (1987-1992), and finally as a Knopf-based free-lance editor, dance columnist for the New York Observer, and eventually a writer himself is told in breathless, unflinchingly name-dropping style, and I loved it.  The index of names dropped runs to nine double columned, single-spaced pages and, oh, what names!  One column, for example, includes William Maxwell, Louis B. Mayer, John McPhee, Louis Menand, Daniel Mendelsohn (described in the final chapter as one who Gottlieb is “as close to as anyone”), Joan Mitchell, Joseph Mitchell, Nancy and Jessica Mitford, Marilyn Monroe, Toni Morrison, Alice Munro, and Haruki Murakami.  The list of authors whose works he edited is staggering:  Morrison, Joseph Heller’s Catch 22, John Cheever’s stories, Robert Caro’s books on Robert Moses and LBJ, and on and on, and his insights into his ‘avid reading’ are delicious to devour.  His range of acquaintances, close friends, and connections is a bit overwhelming, and it often proved somewhat annoyingly impossible to keep everyone straight.  Living in homes in NYC, Paris, and Miami, travelling often to London and Japan, editing and reading nearly every hour of the week, Gottlieb has, in his own words, raging energy and a deep interest in knowing accompanied by a staggering level of self-confidence, bordering on but not quite reaching arrogance.  In fact, I believe that it is his basic humility that has made him a wonderful friend to so many.  By his own admission, not the best husband, father, or son, he has thrown his whole life into literature, dance (NYC Ballet, ABT, and Miami Ballet), jazz and popular lyrics, and friends.  If you like to read or if you believe that life and reading are indissolubly intertwined, READ THIS BOOK! (L)