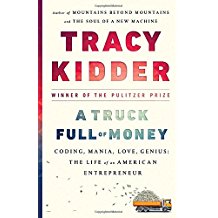 Kidder’s 11th book tells the story of Paul English, an Irish-Boston native with bipolar disorder who scraped through Boston Latin and UMass and ended up being a wildly successful software entrepreneur who made millions on the sale of Kayak.  In his usual fashion, Kidder takes on an entertaining and informative journey in time, space, and content following English who himself is wildly ADHD, creative, entertaining, and charismatic.  Whether selling ‘pixie dust’ ideas to VC hard asses, recruiting talented software engineers and idea people, or muddling his way through his own messed up private life, English is a fascinating character, emblematic of the 21st Century.   Fascinating asides introduce the reader to two wonderful good Samaritans—Tom White who funded Partners in Health for many years, and James O’Connell, the Boston doctor to the homeless.  Inspiring stories about how good people can turn their wealth of money or wealth of caring into concrete improvements for needy people:  “the clean socks we can do.”  This fast-paced and scattered book ends on a wonderful note with English as an Uber driver meeting new people in his Tesla used for Uber X, achieving a 4.97 rating, and making as much as $50/night.  LOL