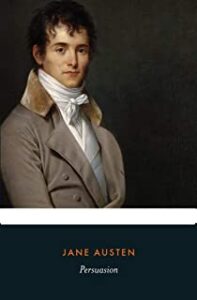 To quote James Taylor, “When this old world is getting you down…”, and how can one read the daily headlines without feeling a bit overwhelmed and depressed at the state of the world. So my perfect antidote was to immerse myself in the early 19th C British countryside and its landed gentry and assorted wanna-be’s, all created by Jane Austen in this, her final novel, published posthumously in 1817.

Austen has once again created a superb cast of characters, each drawn as if with a fine brush, turned them loose in a lovely pastoral setting, and then provided commentary on a complicated set of relationships that was guaranteed to provide ample opportunity for good as well as very bad behavior.  Her sense of proportion, novelistic tension, and descriptive powers were put to good use in this fine story about Miss Anne Elliot, a 27 year old daughter of the nearly bankrupt Sir Walter Eliot, the recipient of a baronetcy and the great house at Kellynch.  When Sir Walter and Anne’s oldest sister Elizabeth find themselves in financial difficulty, they are persuaded by their counselers to rent the manor house and move to Bath.  This sets up all sorts of unforeseen encounters, most of all between Anne and Captain Frederick Wentworth, a naval officer and the brother of the wife who rented Kellynch.  Wentworth and Anne had been very much in love and had planned to marry 8 years earlier, but Anne had been persuaded by her family that it was not a good match—-money, land, status were the determining factors for the family and Anne capitulated.  Eight years later, Anne and Wentworth were not to be denied again, though getting there was quite complicated and full of drama.  Money, money, money and marriage, marriage, marriage were the themes that dominated English life in the early 1800’s and Austen was masterful at exposing these petty intrigues, in this novel through the theme of ‘persuasion’.

I had forgotten how charming, entertaining, and engrossing Austen could be. I loved every minute of this book even while feeling contempt towards several of her well-drawn characters.  At the end of the day, a fine set of marriages makes all well, as appears to be the goal that society set for women in the early 19th C.

Another World: Poetry and Art by Young People, ed. Ann and Tony Gengarelly ...