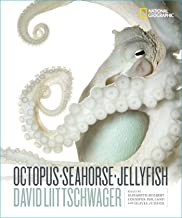 This is a big, beautiful, and informative book with photographs by a National Geographic staffer and with essays by the well-regarded science writers Elizabeth Kolbert, Jennifer Holland, and Olivia Judson.  It’s too big to curl up with in bed, so my recommendation is to find a comfy couch or overstuffed chair and settle in for an eye-popping and amazing hour.

Liittschwager has provided some truly spectacular photographs of these three inhabitants of our oceans, all little-studied and poorly documented by modern science, all probably threatened by climate change and overfishing, and all except perhaps the seahorses, generally regarded with terror or at least ‘yuck’.  The essays provide the factual information that geeks like me are drawn to (e.g. There are 47 species of seahorse and the octopus has 500 million neurons, almost on a par with cats and several-fold more than a rat.)  These creatures have been around since at least the Cambrian (that would be about 500 million years ago!), and we humans  share a common ancestor with each of them if you go back at least that far.  Evolution is an amazing phenomenon.

Whether you read each caption ( which includes genus, species, size, and location where that animal was found) or whether you just leaf through the 250 pages of brilliantly colored and incredibly detailed photographs, this is a book worth perusing.  Perhaps the most startling take home message for me was the fact that 2/3 of the octopus’ neurons are distributed in its arms and its suction cups and that each of these elements can operate independently.  Even at this advanced age, I am in awe of our natural world and still eager to learn.

These are amazing and amazingly beautiful creations of nature.  Liittschwager’s photographic skills enable us to appreciate them in a way that until now has not been possible.  Look through this book, and whether you are a literal believer in God the Creator or a strict evolutionist, you will come away with a sense of awe.