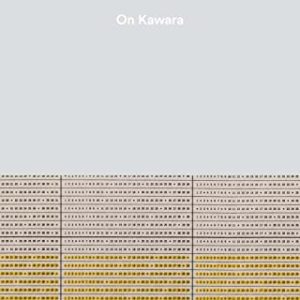 On Kawara from Glenstone 2018

On Kawara (1932-2014) is perhaps my most loved artist and greatest influence on any ability I’ve developed as a conceptual artist.  Kawara was steeped in the interplay between our lives and space and time.  The main essay in this volume was written by the contemporary novelist and cultural critic, Lynne Tillman, who writes “Kawara marks the temporality of the present and life’s staggering temporariness….  Of the trillions of events in everyday life, little becomes history, little is collected and saved…the multitudes neglected or overlooked or lost, profound reminders of how much has disappeared.” Tillman is referring to Kawara’s practice of doing a daily painting of the date, a series of Date Paintings that he began in 1966 and performed faithfully until 2013.  He nestled each painting in a plain cardboard box lined with that day’s newspaper, filled with stories of the quotidian and unmarked.  He also sent two postcards to friends every day from wherever he was all over the world from 1968 through 1979 featuring the rubber-stamped phrase I Got Up along with his time of rising.  As some of you know, I adopted and adapted this practice on January 1, 2016 and have now sent 1545 daily postcards with I Got Up, adding the # of the postcard as well as my day of life (#27,217 today for those who are following).  In addition, Kawara created books with all the dates for 1 million years in the past and 1 million years in the future, 100 year calendars, and detailed diaries of who he met and where he went.  He makes my obsessiveness look like child’s play.  Through it all, he refused interviews, photo sessions, and public speaking, remaining 100% focused on his time and space works.  Tillman’s essay is a fine addition to the Guggenheim catalog ‘Silence’ from 2015 and further enriched my understanding of this enigmatic and wonderfully creative artist.  My favorite part of the book is a single page headed Biography of On Kawara.  The page is entirely blank except for the phrase 29,771 days in small, plain font centered left to right but asymmetrically above the middle—a perfect summary of this great artist’s life.  The book was published by Glenstone, a private collection in Potomac, MD that has been made accessible to the public through the beautiful creativity of architect Thomas Phifer and Partners and the landscape architect Peter Walker and Partners.  One entire gallery was designed in partnership with Kawara and is dedicated to his work.  It features just three date paintings.  They relate to the Apollo 11 moon landing in July, 1969–the dates of lift-off, landing, and the moon walk.  I heartily recommend a visit to Glenstone to see Kawara’s work in person as well as the other parts of this incredible collection including outdoor works by Andy Goldsworthy, Richard Serra, and Ellsworth Kelly.

The World’s Edge–the Atlas Of Emptiness and Extremity, Thomas Joshua...