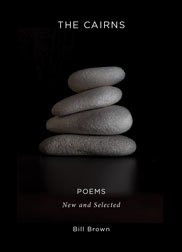 This is a book filled with beautiful poems about Brown’s rural Tennessee countryside and his deep feelings about his family, especially his parents.  Sent to me by dear friends in Nashville, this was my initial exposure to this fine poet who has published 10 books and is a long-time teacher at Vanderbilt and the Bread Loaf Writers’ Conference in Middlebury, VT.  Both of those geographies feature in his poems, the latter at least partly due to the apparent Vermont connection through Brown’s wife’s mother.  His own mother and father appear and reappear throughout this collection as do his siblings, one of whom is a surgeon.  But the central focus of the poems is nature—brooks, stones, trees, hills, ponds, and the animals that live there.  In his poem, This Morning dedicated to William Stafford, Brown writes “Mist rises from Sulfur Creek/like incense, and I think how mother/loved the scent of plowed fields/after rain, how one can almost hear/new seeds dreaming the verb to be.”  Brown dedicates many of these poems to some of my favorite poets including Stanley Kunitz, C.K. Williams, Wistawa Szymborska, and Theodore Roethke.  In a poem about his mother’s making applesauce he writes after her death, “No visits left in this life, except her lesson/about waste, the importance of making/much out of little, the memory of steamed/kitchen scented with vanilla, and one jar/left in the pantry no one will touch.” His poem ‘The Names of Creeks’ which ends with the names of four of them is so reminiscent of Donald Hall’s poem about the names of old horses that I was brought up short.  There are so many poems worth quoting from but you’ll have to read them yourself.  This is a beautiful collection which I am indebted to my friends for helping me discover.  The gift of a book is truly a blessing.