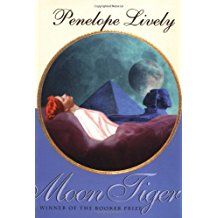 It’s 1987, and 78 year old Claudia Hampton is dying in a London hospital.  During her periods of lucidity she is visited by her daughter, her ex-husband, her sister-in-law, and her adopted Hungarian son, and in each encounter we hear both Claudia’s and her visitor’s take on events from their shared history.  Between visits,  she often dreams and in these flashbacks we learn additional details about this fascinating, intrepid, and worldly woman.  A war correspondent, she makes her way to the front during the desert war in Egypt and Cairo (where Lively was born and lived as a child) where Rommel’s and Montgomery’s armies struggle for supremacy. There she meets Tom Southern. a British tank commander,  who becomes the only real love of her life.  The story unfolds over the decades in various voices describing the same events in episodes that randomly wander through time and places.  The writing is so vivid and engaging that by chapter 3, I was already regretting that it would end, and when I did reach the final page, I still felt that way.  Lively, whose non-fiction books of essays I’ve loved, won the Booker Prize for this novel, and then it was chosen as the best Booker of the 1980’s.  I totally agree with that verdict and highly recommend this novel.  The moon tiger of the title, by the way, is a slow burning incense-like substance in a spiral that was used to keep insects at bay in the hotel room where Claudia and Tom spent their time in Cairo.