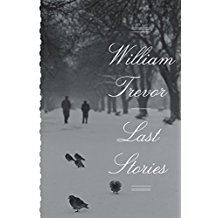 Trevor, who died at age 90 in 2016, wrote these ten stories between 1995-2013; nine of them are published here for the first time.  One of my all time favorite short story writers, I loved Trevor’s previous volume of Selected Stories, a large volume from 2009.  These stories, however, often left me confused and unsure of what was happening.  They all had the trademark Trevor atmosphere of dark, disappointed, dismal life, but I finished nearly all of them puzzling over the final word, sentence, paragraph or page.  What was he trying to tell me that I was missing?  Frustrated, I did something that I never do before writing these reviews—I read someone else’s review, in this case Julian Barnes in the Guardian in May, 2018.  What a relief to find that Barnes, while also a Trevor fan, described these stories as follows:  “There are doubts and ambiguities at every turn.  Did they go to bed together or not?  Was it an accident or suicide?  Where does fault or responsibility lie?….(Trevor) does not make a point of being demanding or obscure but he is very subtle.”  I’ll say!  Barnes goes on to state that there is ‘readily doubt and misprision’ throughout.  (For those of you like me, who had no idea what ‘misprision’ means, it’s defined as ” the deliberate concealment of one’s knowledge of a treasonable act or a felony”)  So, Barnes confirmed my own confusion and indicated that it was, at least in part, Trevor’s goal.  The stories are beautifully written, but if you’re looking to get to know William Trevor, I’d read his Selected Stories or one of his other 13 volumes of short stories.

Coming of Age: My Journey to the Eighties, Madeleine May Kunin (#2323)