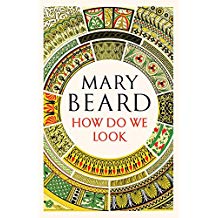 Beard is a Professor of Classics at Cambridge University (UK) who has written widely on Greek and Roman history, art, and culture.  Her Confronting the Classics which I read in 2013 was a treat, and I had high hopes for this volume.  Alas, I was disappointed.  There were occasional flashes of her characteristic humor, and there was the constant presence of her erudition, but overall, the book fell flat.  Divided into two parts—one examining how art dealt with the human body and the second dealing with how art dealt with God—the book takes the reader across the world from the Acropolis to the Blue Mosque, from Ely Cathedral in England to Seville’s Church of the Macarena, from Angkor Wat to the caves of Ajanta in India, but the themes get lost in the travelogue.  I think the problem here was that the book was written as an accompaniment to a BBC series which re-examines Kenneth Clark’s classic BBC series, Civilization which thrilled me when it was on TV in 1969.  Beard wrestles with art and how we look at it as she applies the concept of civilization to her various stops around the world.  Some beautiful photographs, but ultimately not very satisfying.

She Read to Us in the Late Afternoons: A Life in Novels, Kathleen Hill (#23...
Scroll to top