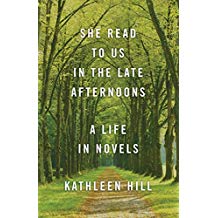 She Read to Us In the Late Afternoons: A Life in Novels, Kathleen Hill 2018

I was browsing in one of my favorite independent bookstores, Books Are Magic, on Smith Street in Brooklyn’s Cobble Hill neighborhood, when I espied this book, its cover sporting a silver medal which read “Nautilus Award Winner”.  Despite never having heard of the Nautilus, I had to buy it since it promised commentary on some of my favorite books.  It turns out that the Nautilus is a 20 year old organization whose tag line is ‘Better Books for a Better World’ and whose goal is to ‘energize the interconnections between books, authors, publishers, and readers and to be responsive to the world through books.”  A quick perusal of past Nautilus winners failed to yield any titles that I recognized, but Hill’s book seems to have garnered significant notice with blurbs on her web page and inside the book from three of my favorite writers: Colm Toibin, Andrea Barrett, and Andre Aciman.  The book was also named as a New York Times Notable book of 2017.  Hill’s book is a non-traditional memoir in which she connects the places and times of her life with her favorite literary works, mostly novels.  Emily Dickinson, Willa Cather, Henry James, Gustave Flaubert, and Marcel Proust all make appearances as Hill moves from her childhood in a small town to her early married years where she and her husband taught in Nigeria and rural France, through her return to New York City as a mother of three, a PhD in English, and a published author.  The conceit of using books which she felt represented her experiences and emotions in these settings works well, especially in the final chapter which focuses on the 21 years when she was a weekly companion and reader to Diana Trilling.  Having met Lionel and Diana Trilling by chance in Venice in 1966, she began visiting Diana in 1975 and reading out loud to her on her weekly visits.  Beginning with Proust’s multi-volume Remembrance of Things Past and moving to Henry James, these sessions provided the basis for a beautiful relationship between the maturing mother and writer that Hill became over those years and the aging widow of the famous Columbia scholar who became an established writer in her own right.  The chapter includes some real nuggets of wisdom as Hill quotes Trilling:  “I don’t know how people grow old without work, and writing is the best work of all.”  I couldn’t agree more.  A good book for those who love memoirs and literature.

The Path of Insight Meditation, Joseph Goldstein and Jack Kornfield (#2328)
Scroll to top