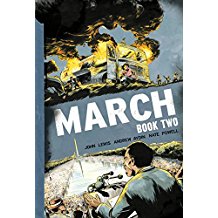 John Lewis picks up his memoir in 1960 as he leads SNCC in an attempt to integrate lunch counters and movie theaters in Nashville.  As in the first volume, the narrative moves back and forth from the events of the civil rights movement in the 1960’s to Barak Obama’s inauguration in 2009, but the mood is clearly darker and more sinister than in the first volume.  Lewis is now in his 20’s, a leader in SNCC, and putting his body on the line in confrontations over integration from Nashville to the Freedom Riders heading to the Deep South.  CORE (the Congress of Racial Equality) was organizing bus trips to New Orleans to test the recent Supreme Court finding which outlawed segregation on buses, and when he signed on and was violently attacked along the way, Lewis began to confront the conspiracy between the Klan, the courts, the police, and elected officials from Birmingham to Montgomery.  With shocking effect, the reader turns a page and is transported from the frighteningly graphic details of the violence at the Montgomery bus station to Aretha Franklin’s singing of America, The Beautiful at the inauguration nearly 50 years later.  Two pages later, we’re back with the bloodied, jailed bus riders, and we meet Robert and John Kennedy for the first time as they begin to appreciate the magnitude of the problem. Voter registration becomes another focus for the movement along with marching for access rights.  James Meredith is escorted into Ole Miss by 300 Federal marshals, George Wallace pledges Segregation Today, Segregation Tomorrow, Segregation Forever in his inaugural address as 45th Governor of Alabama, Bull Connor turns dogs and firehoses on marchers in Birmingham, Medgar Evers is murdered, and Lewis is elected Chairman of SNCC.  The Big Six (A. Philip Randolph, Martin Luther King, Jr, Whitney Young, James Farmer, Roy Wilkins, and Lewis) meet with JFK and try to chart a course between non-violence, cooperation with the Federal Government, and marching and other action.  August 28, 1963 sees hundreds of thousands gather for the March on Washington, MLK’s famous speech, and Lewis’s wake up message and emphasis on One Man, One Vote.  The hope of that day is shattered in the final panels of this volume with the bombing of the Sixteenth Street Baptist Church in Birmingham only 2 weeks later—-an exhausting and depressing reminder of the struggle for man’s better angels that is continued in the third and final volume.