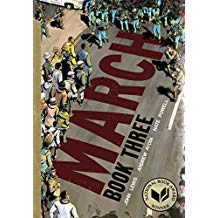 Book 3 in this magnificent graphic memoir series begins with the Birmingham church bombing that killed four young girls at their place of worship, and it ends with the decision by Lewis and his aide, Andrew Aylin, the night of Obama’s inauguration to embark on this series.  In between, this reader was often emotionally overwhelmed as the details of the events leading up to the Voter Rights Law of 1965 are drawn and narrated by Lewis.  As in the previous two volumes, when the 1960’s story reaches a seemingly unendurable emotional pitch, the reader is fast forwarded to Obama’s inauguration and then snapped back again to the ugly past.  The endless violence of Mississippi’s Freedom Summer beginning with the murders of Mickey Schwerner, Andy Goodman, and James Chaney; the efforts of the Mississippi Freedom Party to be seated at the 1964 Democratic Convention; the pressure brought to bear on Johnson and Humphrey as they faced the loss of their traditional southern base; the lurch to the right of the Republicans as they nominated Goldwater over the comparatively liberal conservative Rockefeller; and the eventual focus on Selma, AL as the center for voting rights efforts are drawn and told in a story that builds to the climax at the Edmund Pettus Bridge, where America was finally forced to confront its conscience and the plight of the “Negro”.  The Bloody Sunday Selma march resulted in deaths, serious injuries, and 15 minutes of violence on American prime time TV that proved to be the turning point.  Johnson gave a nationally televised address to Congress one week after Bloody Sunday in which he said “There is no Negro problem.  There is no southern problem.  There is no northern problem.  There is only an American problem….Their cause must be our cause, too.  Because it’s not just Negroes but really it’s all of us  who must overcome this crippling legacy of bigotry and injustice and we shall overcome.”  Four months later, the Voting Act of 1965 was passed and signed into law.  At the signing ceremony, Lewis was given a pen by LBJ, but he knew that it was the ‘last day of the movement as I knew it.’  Great work remained, and Lewis would be part of it for more than 50 more years.  My heart aches for what he must feel these days as Trump and his lackeys in the Congress and courts undo much of the work that Lewis and the hundreds of people who marched and stood with him accomplished.  Voting Rights are being rolled back, not expanded.  The far Right have added  immigrants, Muslims, Jews, and others to the African-American as objects of their ignorant hatred and vitriol.  And instead of courageous leadership from D.C., we have craven narcissism and pandering to the worst instincts of some of our fellow citizens.  Lewis has given us an example of how one person with courage and tenacity can make a difference.  Do we have enough of those today to roll back the oncoming night in America?