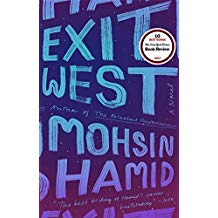 Hamid’s fourth novel was  chosen as a Best Ten book by the New York Times in 2017. It’s the story of Saeed and Nadia who meet at an evening class on corporate identity and branding.  This regular, normal educational experience, however, takes place in an unnamed city which is in the midst of a civil war between an unnamed country (probably Syria) and the ‘militants’, Islamist extremists who cut throats if you have the wrong last name.  While the city slowly crumbles around them, Saeed and Nadia fall in love, move in with Saeed’s father after his mother is killed by a stray bullet, and eventually pass through a ‘door’ and begin their travels from Mykonos,London, and eventually, Marin, California.  The book combines this ‘normal’ love story with a surreal treatment of the universal immigrants’ experience.  Hamid deals realistically with the immigrants’ lot in their own war-racked country and with the immense difficulties in their new ‘homes’ as they are attacked and isolated by the ‘natives’, but he elides over the experience of getting out with the sci fi element of the ‘doors’ through which the immigrants pass from one location to another.  There are further surreal elements as he occasionally adds a brief story about a character who appears and then vanishes and with the narrator’s knowledge of the future that is hidden to the characters.  A powerful and sympathetic book about our world of migration and disruption.