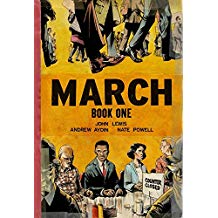 John Lewis and his two collaborators have written a stirring story of the civil rights movement of the 1960’s.  The graphic memoir begins with the Bloody Sunday march over the Edmund Pettus bridge in Selma, Alabama in March, 1965 where Lewis and others were brutally beaten by Alabama state troopers and local police.  The story then weaves back and forth in time from Lewis’s childhood in Troy, AL to January 20,2009 when Barak Obama was inaugurated as the first Black President of the United States.  We learn about Lewis’s family, poor sharecroppers scratching out a living on the land, and about his early wish to be a preacher.  As a young teen, he visited Buffalo with a maternal uncle, experiencing the humiliations of separate and unequal dining, lodging, and bathrooms in the South and the comparable freedom and richness of life in the integrated North.  Brown vs. the Board of Education, the emergence of a young Atlanta preacher named Martin Luther King, Jr, and the murder of Emmett Till and the acquittal of his murderers by an all white jury provide the backdrop to Lewis’s enrollment in an all-Black bible college in Nashville, his embrace of non-violence, his leadership of attempts to integrate lunch counters in Nashville, his first experience with the bias of the courts and his resulting jail time, and the founding of the Student Non-Violent Coordinating Committee (SNCC).  These events are all told by Congressman Lewis to two young Black children brought to his office by their mother on Inauguration Day.  The distance that Lewis traveled from Troy, AL to his 16 terms as a Georgia Congressman and the distance that the nation has traveled from the violence and hatred of segregation to the election of Barak Obama are clearly presented in fine graphics and brief and powerful narrative.  This volume ends with a feeling of hope and possibility, soon to change as the next two volumes head into the dark years between 1960 and 1965.