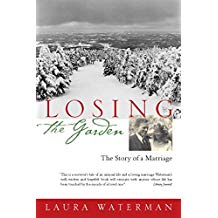 Losing the Garden: The Story of a Marriage, Laura Waterman 2005

I well remember reading a number of years ago of the death of a Vermont man who had chosen to climb a high peak in New Hampshire in below zero February weather in order to lie down on the summit and quietly die.  So it was with some excitement that I found Laura Waterman’s book at a wonderful used book store in downtown Boston, Commonwealth Books.  Laura is the widow of Guy Waterman, the outdoors-man who died that day in 2000 on the top of Mt. Lafayette in the Presidential Range.  The book begins and ends with Guy’s suicide, and in between it takes the reader through their 28 years of marriage in their “garden of Eden’ they called Barra, after an island in the Hebrides where Guy’s mother’s family originated.  On Barra’s 40 some acres in East Corinth, Vermont, they lived a life that made Scott Nearing’s ‘back to the land’ and ‘sustainability’ philosophy look positively lush—-no running water, no indoor toilet, no electricity, no heat source other than wood, no food other than what they raised, and on and on.  They had a huge garden, a maple sugaring operation, woods for their 8 cords of firewood each year, a 500 square foot cabin they built, and a guest house.  It all seemed Edenic except that Guy was deeply troubled in a way that not even his obsessive compulsive record keeping (three times daily temperatures at three locations, the numbers of blueberry’s picked from each bush, the amount of sap from each named maple tree, daily notes, etc, etc)  could keep at bay.  The loss of two of his sons in climbing accidents (no bodies were ever recovered) and the alienation from his youngest son and the divorce from his first wife contributed to his ‘demons’ which first manifested themselves when he had a psychiatric hospitalization during high school.  He began to act on his suicidal thoughts 8 years before he finally ended his life with the full knowledge and cooperation of his wife.  This is a difficult book to read both because one is rooting for the Watermans in their ‘back to nature’ life style while always aware of the pain and suffering that Guy endured and which Laura absorbed.  Not a book for everyone, but glad I now know the backstory to Guy’s death.  When they were discussing his upcoming suicide, they speculated that the local weekly paper might note his passing.  How surprised he would have been to read the obituaries that appeared in newspapers from the New York Times to the LA Times.