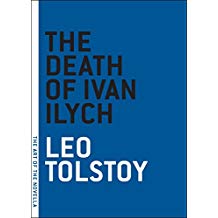 Tolstoy wrote his famous novella in 1886, well after the publication of War and Peace and shortly after Anna Karenina was completed.  He was in the midst of his renunciation of the secular life of the Russian aristocracy and Russian Orthodox religion and moving towards his identification with the Russian peasants, pacifism,  and the simple religious life without the intermediary of the church.  In Ivan Ilych, he tells a moving story about one man’s descent from a comfortable bourgeois life to an agonizing death.  Ilych was a successful man by every measure—a respected judge, the owner of a large, newly decorated home, the father of a daughter about to make a promising marriage match, and a husband in a long term marriage.  And then, it all falls apart.  Blaming the pain in his left side on a fall from a ladder, Ilych’s life begins to slowly unravel under the pressure of the unrelenting pain and progressive cachexia.  Expert physicians are consulted, and with the limited tools available in the late 19th C, they assure him that his ‘floating kidney’ or ‘problem appendix’ will soon respond to their medicines.  Family, friends, associates all collude with the doctors to deny Ilych’s inexorable downhill course which within 3 months results in his death.  Because they refuse to acknowledge his real situation, Ilych is alone with his pain and more importantly, with his fear.  Isolated and marginalized, his only comfort comes from Gerasim, a young peasant who is willing to meet Ilych in real human terms of sympathy, affection, and attention, while others focus on what Ilych’s death will mean for them (promotion, inheritance, etc) or their relief (“the very fact of the death of a close acquaintance awoke as ever in each of them a familiar gladness: it’s he who’s dead, not me.”).  Tolstoy explores what a meaningful life might look like when an hour before Ilych would die he ‘had it revealed to him that his life might not have been what it should have, but there was still time to make up for it.”  He dies quietly thinking “It’s the end of my death.  There won’t be anything else.”   This thought was stimulated by a kiss on his hand from his young son, as Tolstoy shows that love, human relationships, and acceptance of our inevitable end are far better goals than wealth and prestige.  While human nature remains unchanged, we’ve made progress in medical care and especially in palliative and end-of-life care that would have made Ilych’s final months less painful and isolated.  There is hope.

I’d Rather Be Reading: The Delights and Dilemmas of the Reading Life,...

Losing the Garden: The Story of a Marriage, Laura Waterman (#2338)
Scroll to top