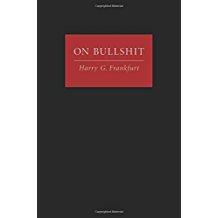 Given the current resident of the White House, it seemed like a propitious time to read Frankfurt’s classic volume about bullshit.  Suggested to me by my erudite lunch club friend and college classmate, Patrick O’Donnell, the book uses its 67 pages to explore the finer points of the differences and distinctions between bullshit and lying.  Frankfurt is an 89 year old emeritus professor of philosophy at Princeton and an influential Humesian when he’s not writing with tongue planted firmly in cheek.  Adopting the disciplined technical analyses of his field, he concludes that lying requires the liar to be knowledgeable about the true facts and to deliberately choose to put forth false information. As he states, “Someone who lies and someone who tells the truth are playing on opposite sides, so to speak, in the same game.  Each responds to the facts as he understands them, although the response of the one is guided by the authority of the truth, while the response of the other defies that authority and refuses to meet its demands.” In contrast, the bullshitter “may not deceive us, or even intend to do so, either about the facts or about what he takes the facts to be. What he does necessarily attempt to deceive us about is his enterprise (my emphasis).  His only indispensably distinctive characteristic is that in a certain way he misrepresents what he is up to,….the motive guiding and controlling his speech is unconcerned with how the things about which he speaks truly are.”  So, Frankfurt has accomplished something that I often seek but only occasionally find in books—-new insight and a new way of viewing the world.  Turns out that Trump is not really a liar; he’s a bullshitter!

Losing the Garden: The Story of a Marriage, Laura Waterman (#2338)