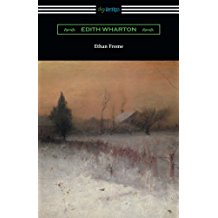 Another re-reading of this classic Wharton novel, always in Vermont, but this time finished in the milkhouse during a snow squall rather than late at night with a scotch.  The story provides additional memorable details with every reading.  Zenobia Pierce comes to Starkfield to nurse Ethan’s ailing and depressed mother and stays on after her death when Ethan ironically fears that he will also fade into depression if he is left alone on the old farm and mill.  He marries Zeena at 21 and seven years later Mattie Silver, an orphaned and penniless cousin of Zeena’s comes to be their housekeeper.  Frome and Silver see no option but to commit suicide on the sledding hill when Zeena sends Mattie away.  The suicide fails and the narrator comes to know their story 24 years later when he spends a blizzard night at the Frome homestead.  A tragic and beautifully told tale.

Maigret and the Saturday Caller, Georges Simenon (#1860)
Scroll to top