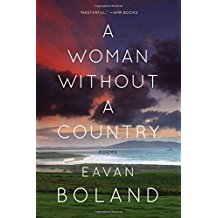 A Woman Without a Country, Eavan Boland, 2014

A marvelous book of poems by this Irish poet who teaches at Stanford.  Themes of sadness and loss predominate in these poems about Ireland’s cultural history and political turmoil, its famine and Catholicism, its immigration and nationhood.  Wonderful facility of turning language into vivid images in poems such as Sea Change (‘…that instinct of amendment history allows/instead of memory’), an Irish Georgic (‘..the stored possibility of another day.”) and a wonderful poem entitled As about metaphor and the limits of language and Advice to an Imagist in which she plays with the word salt as follows:  …the word that comes/to the edge of meaning/and enters it:/What a man is worth,/What is rubbed into the wound,/What is of the earth.” These are beautiful and haunting poems worth returning to again.