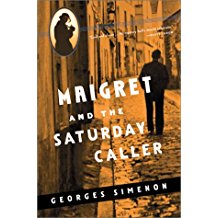 A one-sitting Simenon and a good one.  Maigret is followed home and approached in his apartment on Richard Lenoire by Leonard Planchon who tells him that he plans to murder his wife and her lover.  Maigret is puzzled by this meek man with a cleft lip who has been displaced in the marital bed by Roger Prou, taken as a lover by Renee.  Planchon does not know what to do 2 years into this arrangement but appears to take courage from Maigret’s listening and involvement.  When Planchon disappears two days later, it is only Maigret’s involvement that reveals that he was murdered.  A classic Maigret in which the Chief Inspector’s interest and fascination with human behavior is the key to solving a murder, one in which in this case had not even happened yet.

Lucky Alan and Other Stories, Jonathan Lethem (#1861)
Scroll to top