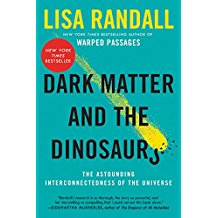 Dark Matter and the Dinosaurs:  The Astounding Interconnectedness of the Universe, Lisa Randall, 2015

It is extraordinary that this 400 page book about astrophysics, the presence of dark matter in the universe, and the periodic extinctions on earth could be published for a general audience.  I found this to be a quite difficult read, not because Randall, a professor at our neighboring institution in Cambridge, doesn’t write clearly and logically, but because the nature of the material is just so damnably complex!  The quick summary is that it is necessary to hypothesize the existence of dark matter which can’t be seen since it neither emits nor reflects light but which comprises 85% of the matter in the universe.  Randall in turn hypothesizes that some dark matter does interact and that it is organized into a dense, thin disk within the disk of our own galaxy, the Milky Way.  The presence of that disk affects the periodic ‘bobbing’ of our solar system above and below the plane of the galaxy and the tidal effect of that bobbing disrupts bodies in the Oort Belt and occasionally sends some into our solar system neighborhood creating comet storms.  Because the bobbing and tidal effects are periodic, the result is a periodic comet storm, a periodic crater record on earth, and a periodic mass extinction which was seen most recently 66 years ago when the dinosaurs along with 75% of the living species disappeared from the earth.  The period appears to be about 32 million years, so we are probably about 2 million years from the last major comet storm and fairly safe from a major extinction event due to a meteor.  Wow!  I was able to glean that information despite sentences such as the following:  “A common aspect of all models is that they include some connection between ordinary matter and dark matter—hinted at either by the coincidence of mass scales for WIMPS, by the proximity of energy densities for asymmetric dark matter models, or by a proposed solution to the strong CP problem in the case of axions.” And if that doesn’t convince you to avoid this book, nothing will.  Strong work, Lisa, but way over my head!