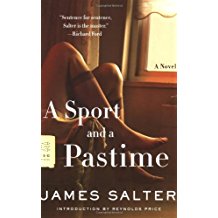 Salter, who died last year at 93, remains the quintessential writer’s writer as the introduction by Reynolds Price to this new edition makes clear.  Author of fewer than a dozen novels, Salter broke new ground in the vivid and explicit expression of sexuality and its ‘enactments’ (as Price says) in this volume.  The story of a 34 year old narrator who spends the summer in his friends’ house in a small village in France and is joined by Philip Dean, a 24 year old Yale drop out.  Dean hooks up with Anne-Marie, a 20 year old office worker and they embark on an incredibly intense sexual summer.  At one point, the narrator says:  “None of this is true.  I’ve said Autun, but it could easily have been Auxerre.  I’m sure you’ll come to realize that I am only putting down details which entered me, fragments that were able to part my flesh.  It’s a story of things that never existed although even the faintest doubt of that, the smallest possibility, plunges everything into darkness.” So what is a reader to make of this? Did Philip Dean exist?  Did Anne-Marie exist?  Price debates this in his introduction and comes down on the side of “yes, they did”.  I come down on the other side viewing the novel as one long masturbatory fantasy of the narrator.  Difficult to know which was Slater’s intent, but whichever it was, he writes incredible sentences and marvelous descriptions.

Dark Matter and the Dinosaurs: The Astounding Interconnectedness of the Universe,...
Scroll to top