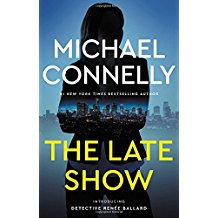 One of my very favorite detective story writers has created a new character, and she is fantastic.  Renee Ballard, 5 feet 7 inches, 122 pounds, is a 15 year veteran of the LAPD and a detective on the late night shift from Hollywood Station.  She had been busted to that lowly station because of a sexual harassment action she brought against her RHD lieutenant, Olivas, which failed when her partner, Ken Chastain refused to back her up.  In this introductory book, Ballard juggles two cases—the near murderous beating of a transsexual prostitute and the multiple murders in a nightclub.  She solves them both with physical strength and a brainy, strategic, and realistic approach to the politics of the LAPD and the evil that exists in the world.  I loved her and the writing is even more vivid than in the Harry Bosch books.  A real winner for the future.

Dark Matter and the Dinosaurs: The Astounding Interconnectedness of the Universe,...