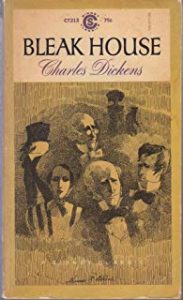 Bleak House almost always appears on the top ten list of books that people feel they should read but never will along with Middlemarch, War and Peace, Moby Dick, etc.  But when it was mentioned by Susan Hill in her book Howard’s End is on the Landing as Dickens’ best, I decided to tackle the 893 page, tiny print paperback that had been languishing on my shelf for years.  It was worth it.  What a terrific read—-funny and scathing in its treatment of the Chancery Court in mid-19th C England, insightful in its management of relationships and the social conditions that produced poverty, child labor, and a fixed class system, and ultimately satisfying in its creation of memorable characters.  As in all Dickens, many of the characters don’t make it to the final page—Lady Dedlock, Jo, Mr. Tulkinghorn, Captain Howland, and even Richard, one of the Jarndyce vs Jarndyce principals expire before the final page.  On the other hand, many virtuous characters find happiness and live happily ever after—-Esther, Allan, Mr. Jarndyce the guardian, and others.  Too difficult to summarize the plot, but fun to think about those Brits waiting for the latest installment every month at a time when TV was a century away and the internet could not have even been thought of.  Another classic down!