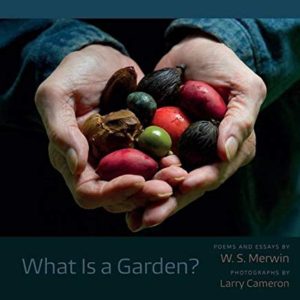 Merwin, one of America’s greatest contemporary poets, died earlier this year at 91.  Among the greatest gifts he left for us in addition to his poems and essays, is a magnificent palm garden on the island of Maui where he moved in the 1970’s.  He bought a seven acre parcel of abandoned land that had been clear cut and ruined by cattle grazing, sugar cane growing and finally plowing for pineapple farming that resulted in severe erosion. But as in his poetry, Merwin saw things that others failed to observe, bought the land, and 30 years later had a “garden” with more than 3000 palms of more than 800 species, many of them threatened with extinction in their native habitats.  This volume resulted from the collaboration between Merwin and Larry Cameron of the University of South Carolina, a partnership that first led to a movie, Witness, in 1995 and now this wonderful combination of poems, essays, and photographs, many of which are drop-dead gorgeous—flowers, fronds, seeds in flaming, tropical colors and profusion.  The essays suffer from redundancy and could have been edited better, but the poems are beautiful and fine accompaniments for the photographs.  My favorite was addressed by Merwin to his wife:  “To Paula in Late Spring”:  Let me imagine that we will come again/when we want to and it will be spring/we will be no older than we ever were/the worn griefs will have eased like the early cloud/through which the morning slowly comes to itself/and the ancient defenses against the dead/will be done with and left to the dead at last/the light will be as it is now in the garden/that we have made here these years together/of our long evenings and astonishment”  This is a fine work for the poetry lover and/or the gardener.