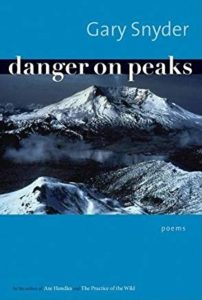 Gary Snyder, at age 89, remains along with Ferlinghetti, the last representatives of the Beat poets of San Francisco. (The night that Alan Ginsberg read his famous “Howl” in SF, Snyder read a poem as well.)  His work over the many decades has been honored with a Pulitzer Prize, Bollingen prize (his 1997 poem, ‘Summer of ’97’ in which he describes building his house in the Sierras has this stanza : “Sun for power/Cedar for siding/Fresh skinned poles for framing/Gravel for crunching and/Bollingen for bucks—“), and an American Book Award.  He anticipated much of today’s environmental movement with his poems about nature drawn from his childhood on farms in Washington and  Seattle and his experiences as a fire-watcher, trail builder, and logger in the Northwest.  His 12 years in Japan gave him a deep seated devotion to Buddhism and my favorite line in this volume reflects on his central tenet:  ‘This dewdrop world/is but a dewdrop world/and yet—“.  It is this ‘and yet’ in the face of nature’s violence (Mt. St. Helen’s eruption is the topic of the first section), man’s inhumanity (the destruction of the Buddhist shrines by the Taliban, 9/11 (‘peregrines’), the endless urban sprawl and traffic that characterizes Snyder’s quiet hope.  A lovely v0lume of poems.