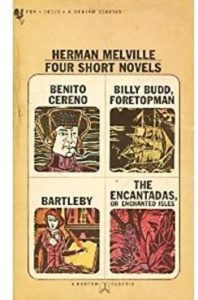 Considered by many to be Melville’s finest work, the novella tells the story of an American ship which had put into a harbor at Santa Maria, Chile to take on water when it encountered a ‘ghost ship’ drifting into the same harbor.  Captain Amasa Delano of Duxbury, Massachusetts, boards the Spanish ship, the San Dominick and finds the captain, Don Benito Cereno to be unwell and listless.  Delano’s suspicions and concerns about the absence of Spanish seamen and the odd behavior of the Negro slaves on board are ultimately borne out when Cereno leaps into the long boat about to bear Delano back to his ship.  The book is based on an actual American sea captain’s writings about a slave ship revolt published in 1817 but Melville writes the original dialogue and paces the story to great effect.  The book raises important questions about slavery and the “Negro” only a few years before the nation confronts those questions in the bloody Civil War.  An interesting connection between the Melville novella and Ralph Ellison’s Invisible Man written 100 years later is Ellison’s use of a quote for his epigraph to the novel.  After the trial of the slaves, Delano asks Cereno, “What has cast such a shadow over you” and Cereno replies simply, “The Negro” implying the whole race and its relationship to the white masters rather than one of the ringleaders of the revolt or even all of the ship’s Blacks.  Worth reading for its powerful writing and pacing, and also for its reflections on our current time of fraught race relations.  One delightful detail is that the 1959 Bantam Classic edition I read has a brief penned note inside the front cover reading “Epstein, Wigg C-31”, my freshman dorm.  Time, time, time….

The Country of the Pointed Firs, Sarah Orne Jewett (#2390)