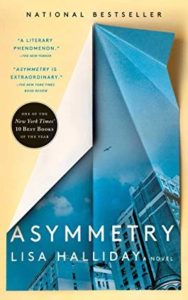 Okay, I give up.  Although I thoroughly enjoyed this book, I remain confused about nearly everything about it, including the structure, the title, and the ending.  Selected by the New York Times as one of the Ten Best Books of 2018 and reviewed and praised extravagantly by nearly every major periodical, this debut novel has three separate and disparate sections.  The first, entitled Folly, tells the story of Mary-Alice Dodge (We only learn her name near the end of the section when she’s called to jury duty, but do you get the double meaning of ‘dodge’? ) and Ezra Blazer (get the double meaning again?), a 70’ish, famous novelist living on Manhattan’s Upper West Side who buys her an ice cream cone and sits with her on a bench in Central Park.  Blazer is clearly modeled on if not actually the real Philip Roth.  Mary-Alice and Ezra become lovers and Mary-Alice’s life gradually sinks into Blazer’s universe, a not entirely displeasing development but one which threatens her independent identity.  This loss of self becomes concrete when another name called at the jury seating is that of Samantha Bargeman, the alias assigned to her by Blazer to prevent rumor-mongering about his relationship with the real Mary-Alice.  How can an alias end up being a real person on the juror rolls of New York City, or is the real person really the alias?  The second section, Madness, tells the story of Amar Ali Jaffari who, due to his being born in a plane above New York City, holds both American and Iraqi passports.  That presents a complex conundrum for the immigration officials in London where he lands to make his connection to Istanbul on Turkish Airlines on his way to Kurdish Iraq to see his family.  While the first section is told by a third person narrator, Jaffari tells his life story in first person segments that alternate with the evolving immigration snafu in London.  He ends up being detained for several days in immigration until he can make the Turkish Airlines connection and during that time, two unrelated events occur.  First, he learns that his brother, a physician caring for the war casualties in Kurdistan has been kidnapped, as Amar’s uncle Zaid had been last year (and murdered despite payment of the ransom). Second, the only other person detained in immigration along with him is “a blonde who looked to be in her late twenties who sat on the other side of the room, crying quietly….She was sitting, her legs crossed and her coat folded over on itself in her lap, the black fur on its hood riffling a little whenever she exhaled or blew her nose.”  Was this Mary-Alice who had bought a parka whose “nylon made a luxurious swishing sound and the hood framed her face with a black halo of fur” when Ezra gave her an envelope with money and sent her to buy a warmer coat at Searle’s at 79th and Madison?  Or was it Sarah Bargeman who seemed to only exist as a fictitious name or as real juror?  And if it was either one of them, what was she doing stuck in immigration control in London???  And if it was neither of them, what’s with the black fur around a parka’s hood?  The final section, Ezra Blazer’s Desert Island Discs melds the real eponymous radio show on BBC 4 which since 1942 has featured more than 3000 celebrities talking about what eight records they would bring if they were to be stranded on a desert island with Ezra, recently awarded the Nobel Prize, as the week’s guest choosing his favorites.  His selections included Strauss’s Four Last Songs which were also prominently featured in one of Roth’s last novels, Everyman.  So there’s the story, now what are we to make of it?  Halliday won a 2017 Whiting Prize and the Foundation describes the book as “singular and beautifully written…impossible to put down and to pin down.”  I agree.  I will continue to puzzle it out in my mind, but in the meantime, don’t leave me alone with this.  Read it and tell me what you think.

Searching for Stars on an Island in Maine, Alan Lightman (#2393)
Scroll to top