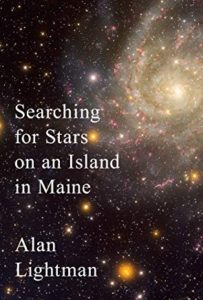 Searching for Stars on an Island in Maine, Alan Lightman 2018

Lightman, a physicist, writer, and professor of the practice of the humanities at MIT, has written an interesting book about the separate heuristics and thought systems of science and religion and how they interact or fail to do so.  Lying on his back on a moss covered rock on a small island off the coast of Maine where he and his family have enjoyed many summers, he finds fascination in the immensity of the universe as seen in the myriad stars in the night sky as well as in the minutia of plants and insects in a square inch of land he examines closely.  Citing Bruno, Galileo, Kepler, Newton and more recently Einstein, Planck, and contemporary cosmologists and astrophysicists, he contrasts the Absolutes of Science’s Central Doctrine (i.e. truth can be tested, independently verified, and stated unequivocally in mathematical terms) and the Absolutes of religion which must be taken on faith since they cannot be proven.  He also contrasts the vitalists who believe in a soul, an immaterial essence that separates man from the rest of the world and the mechanists who view man as a complex system but one that comprises the same atoms, molecules, and chemistry that are identical to those in the rest of the universe.  Lightman’s goal is admirable and he partially succeeds, but he too often drifts off into saccharine and treacly language and phrases.  Had he kept it more serious and focused, this could have been a far superior book, but as it is, it provides a gentle introduction to many of the controversies that have separated humans for centuries, e.g. Aristotle vs Augustine, Trump vs the rest of the educated world.

The Magnanimous Heart: Compassion and Love, Loss and Grief, Joy and Liberation,...
Scroll to top