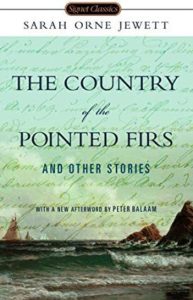 The Country of the Pointed Firs, Sarah Orne Jewett 1896

What a wonderful surprise this book was!  I had bought it at a used book store, and it had sat for several years on the windowsill on the second floor of our Vermont home.  I would see its lovely cover every morning as I greeted the morning sun rising over Mt. Ascutney, but I had little inclination to read a book written about the Maine coast over one hundred years ago by a largely forgotten author. Think again!  For no particular reason, I sat down to browse through it a few days ago on a frigid, snowy morning, and  by page 2, I was totally captured by the town of Dunnet, Maine and its townsfolk.  This fictional novella was written in the first person voice of a narrator who visited Dunnet over two summers, staying in Mrs. Todd’s home and visiting widely among the townsfolk.  Jewett was well versed in the world of small town Maine, having lived her whole life in South Berwick, ME.  She writes simply but engagingly with a real sense of the speech and relationships among the townsfolk—the simple-sermoned pastor, the earthy and sympathetic doctor, the bachelor fisherman who marries the woman who has a flock of sheep after her mother dies, the isolated widow who believes that she is Queen Victoria’s long lost twin—these are wonderful portraits sketched with a few fine strokes of her pen.  Who would have believed that I would be totally enthralled by such a book?  One who would have believed is Willa Cather who wrote the introduction to this volume in 1925 proclaiming Jewett’s book to be one of three American novels which “have the possibility of a long, long life.”  Her other two nominees were The Scarlet Letter and Huckleberry Finn—not shabby company!  One could do well to spend a quiet summer weekend in the hammock or a winter weekend by the wood stove with Jewett and her Dunnet, Maine companions.