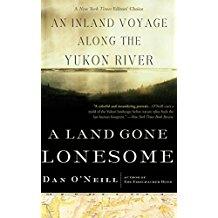 A Land Gone Lonesome:  An Inland Voyage along the Yukon River, Dan O’Neill, 2006

O’Neill revisits much of the land and people described by McPhee on his journey down the Yukon by boat starting in Dawson, BC and ending up in Circle, AK.  The writing is not as vivid, though it’s good and occasionally hits McPhee’s heights, and it goes on a bit too long, but it’s an excellent overview of how the Alaska settlement law allotting land to the Native Americans, the Federal Government for National Parks, and the State, has left little room and no enthusiasm for subsistence living described by McPhee.  The most interesting section revisits several of McPhee’s most colorful characters.  Among them is John Borg the postmaster, mayor, et al of Eagle for several decades who made a list of the 47 people mentioned by McPhee  and observed that only five still lived in Eagle and 26 are dead, four by homicide, a rate of murder that is about 400X that of Chicago’s!  This book was suggested to me by David Jonas and Jenna who after growing up in Jewish homes in comfortable suburbs have gone back to the land, living in two cabins around Fairbanks, one on the Chena River, and who live on moose and caribou they have shot and fish they have caught.  Wonderful young people.