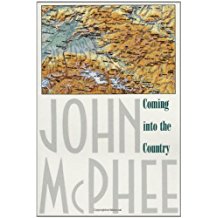 Coming into the Country, John McPhee, 1976

A classic book by a classic author!  McPhee travels to Alaska talking deeply with many individuals to get a sense and convey a picture of this huge and only recently added state (1959).  In three chapters dealing with 1) a trip down the Salmon River in the Brooks Range territory with four state and Federal administrators for fish, wildlife, and the environment, 2)Alaska’s efforts to move the capital from Juneau to another site (this ultimately failed due to costs, though that was not known to McPhee at the time) and 3)the longest section focused on ‘coming into the country’ a lyrical view of subsistence fishermen, trappers, and survivors living on the Yukon and its tributaries around Eagle, the first American town entered as one moves down the Yukon from Canada.  Beautiful writing, especially his descriptions of the individuals’ physical characteristics as well as personalities.  Big people in a big land.  Worth rereading for anyone thinking of visiting Alaska.

A Land Gone Lonesome: An Inland Voyage Along the Yukon River, Dan O’Neill...
Scroll to top