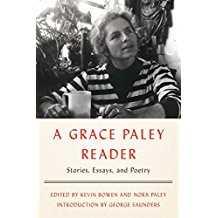 Paley was a fascinating individual and a great short story writer!  Born in 1922 to Jewish Ukrainian immigrants and growing up in a socialist, politically active household, she became a lifelong advocate for women, peace, social justice, and children.  When she married for the second time, her husband, Bob Nichols, had a house in Thetford, VT and she became a Vermont resident in the 1970’s.  She died in Thetford in 2007.  This volume collects 15 of her best known stories from her three volumes of short stories, an eclectic collection of non-fiction misleadingly labeled ‘essays’, and 34 poems.  With a superb introduction by George Saunders and a long blurb from Yusef Komunyakaa, the book delivers on most of its promises.  The beauty of the combination of the three genres is that it helps the reader to understand how Paley thought about the major social problems of the times, about her writing, and mostly about the relationships with family and friends that were the center of her life.  The non-fiction piece about writing in which she urges her students to tell stories, primarily about the facts of ‘money and blood’, to use language that ‘comes to you from your parents and your street and your friends”, and to write in the first person about ‘a situation you don’t understand”.  This approach to her writing comes through in each of the wonderful stories in this volume.  Her Collected Stories was nominated for a Pulitzer and National Book Award in 1990,  but for those who failed to notice that, this selection is a fine introduction to her work and gives the reader the clear picture of being a young daughter, a young mother and a suffering wife in the New York City urban setting of the 1950’s.  Paley is an important author and activist and this volume will introduce her to new readers as well as bring old and new work to her long time enthusiasts.