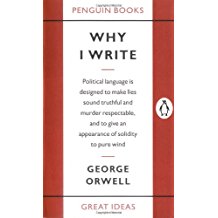 Eric Blair, who wrote under the name George Orwell, is one of the great 20th C essayists.  In addition to his classic novels, Animal Farm and 1984, Orwell wrote extensively about British society, the Spanish Civil War, and writing, and those topics are addressed in these four essays from the mid-1900’s.  Why I write identifies four primary reasons:  sheer egoism, aesthetic enthusiasm, historical impulse, and political purpose.  He then concentrates on the latter and demonstrates that purpose in his essay entitled, The Lion and the Unicorn: Socialism and the English Genius.  This fine work written in the midst of WWII, predicts that England can win the war by adopting a socialist platform that nationalizes mining, transportation, and industry, improves public education, transitions the colonies to freedom, reduces income inequality, and forms alliances with China and others to defeat the Axis.  In the absence of these changes, Orwell sees appeasement and a lost cause in the hands of the stupid aristocracy.  The third essay is an unusual look at the hanging of a criminal in Burma where Orwell served in the colonial police for several years.  The final essay is about the destruction of the English language in the hands of modern writers.  All in all, a fine survey of this exceptional writer.