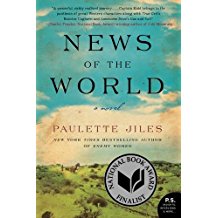 This is a fine novel vividly creating a credible and tangible world, two extra-ordinary main characters, and a memorable supporting cast.  Captain Jefferson Kyle Kidd is a veteran of the War of 1812 and the Mexican-American War who at the age of 72 supports himself by ‘reading the news’ at evening events in small towns along the Texas frontier.  Originally from Georgia and widowed from his Spanish wife after living in San Antonio for a long time, Kidd is winding down, a satisfied and secure man when he is thrust into the role of child guardian.  An Indian agent gives him a fifty dollar gold piece to return Johanna Leonberger to her aunt and uncle in Castroville.  Johanna, age 10, had been kidnapped by Kiowa raiders who had killed her parents and younger sister and had lived with the Indians for four years.  Her return to civilization, their growing bond, and the happy ending make for a fine novel.

Advice Not Given: A Guide to Getting Over Yourself, Mark Epstein (#2251)