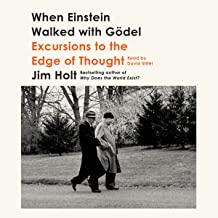 When Einstein Walked with Godel: Excursions to the Edge of Thought, Jim Holt 2018

A follow up to his incredibly interesting and arcane, Why Does the World Exist? 2012 (#1515 in the Book Journal), Holt has once again written a rather amazing and incredibly complex, challenging  and beautiful 350+pages about physics, mathematics, and philosophy.  This is not easy stuff and Holt doesn’t dumb it down for the average reader.  Despite my background in science (albeit the physics and math that I learned in college is now routine material for the junior high student!), I struggled with many of the concepts.  Also, beginning with the title’s giants of physics and math who were in fact often walking together in the 1950’s at the Institute for Advanced Study at Princeton, Holt is an amazingly prolific name-dropper, not in the sense of ‘I knew so-and-so’ but in the honorable business of attribution.  Names and mini-bios fall like rain, and though many are quite interesting, it’s a bit much.  A good editor might have shortened this book by 1/3, but though I struggled often, I enjoyed the ride.  Holt alternates chapters about major concepts (prime numbers, time, geometrical creatures, and ‘spooky action at a distance’ or the entanglement of basic particles) with fascinating chapters about the actors on these stages—the tragic life of Alan Turing, breaker of the WWII German ENIGMA code and inventor of the modern computer; Augusta Ada Byron the daughter of Lord Byron who is felt by some to have been the first writer of computer code; Emmy Noether ‘among the greatest pure mathematicians of the 20th C” whose law of conservation and symmetry is fundamental to the ‘timelessness of physical truth’; Werner Heisenberg and the Nazi’s search for the atomic bomb;  David Foster Wallace and his work with infinity and the infinitesimal (see Zeno here!), and Benoit Mandelbrot and his fractals.  Perhaps the most memorable phrase from the book, however, is in the last section where short essays on a wide variety of topics are engaging and entertaining.  Among the many clever and fascinating essays is one about religion where Holt suggests that all churches bear a sign on the outside stating:  “Important, if true.”  Not for everyone, but if you like science, math, biography, and wonderful writing, give it a try.