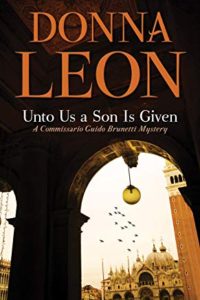 In the 28th novel in her Commissario Guido Brunetti series, Leon once again explores the lives of citizens of Venice, a city where Brunetti has lived his whole life and is now a senior police officer.  In this fine addition to the series, which takes its title from Isaiah 9:6-7, Brunetti is asked by his father-in-law, a wealthy Count, to intercede with the Count’s best friend, Gustavo an octogenarian Spaniard living in Venice who has decided to adopt a son in order to pass on his art collection and wealth. The son is a 40ish gigolo who the gay Gustavo has fallen in love with and who, as the adopted son,  would stand to inherit everything.  The Count’s request draws Brunetti into a web of deception, intrigue, and ultimately murder.  As usual in Leon’s books, the crime is almost an incidental detail, only important as a plot element that allows her to delve into  the behavior and motivations of the characters.  Leon adds some details to the emerging picture of Brunetti—his fascination with Greek tragic literature, his preference for reading since he considers movies and TV a waste of time, his fondness for Pinot Grigio, his dependence on Signora Elettra at the Questera, and his wonderful relationships with his wife and two children.  There are some powerful paragraphs describing aging since some of the main characters in this book are in their 80’s and declining.  And in a thinly veiled reference to the world in the age of Trump, Brunetti contrasts the Greek emphasis on honor with the present world, “And here we are , two thousand years later, and greed was the common denominator of human action.”  Since we are visiting Venice in the Fall, I read much of this book at my computer where I followed Brunetti’s walks and vaporetto rides on Google Maps, beginning to get an understanding of the geography of this ancient and fascinating city.  I’m even more convinced that Leon and Brunetti owe a large debt to Simenon and Maigret with Venice standing in for Paris.  Already looking forward to the next Brunetti novel.