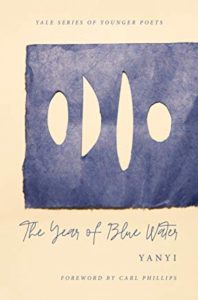 This book was the winner of the 2018 Yale Younger Poets Prize, at 100 years old, the oldest literary prize in America.  Past winners have included Adrienne Rich, John Ashbery, Robert Hass, and John Hollander among others.  Judged by Carl Phillips whose interview in the Paris Review I had recently read, I picked this book up at the library knowing nothing about it except that it had won the prize.  I soon discovered that it was not in my sweet spot—blank verse written by a young, trans, Asian immigrant. But, perhaps because I am growing wiser and more mature under the influence of my wife and daughters, I stuck with it and found it be quite moving and beautiful.  Yanyi writes about his inner turmoil, his dreams, his thoughts of suicide, his friends who saved him, all in short, prose poems that are complex yet accessible.  Addressing other poets and artists who were familiar to me (Frank O’Hara, Agnes Martin, Louise Gluck, and Robert Hass) as well as three Black poets who were not (Robin Coste Lewis,  Audre Lorde, and Tonya Foster), Yanyi acknowledges his debt to his predecessors while striking out on new paths.  One line that especially spoke to me was “I’m writing; I invite you to my life.”  None of the poems have titles, but a later one in the collection reads “The thing about hiding one thing about yourself for ten years is that it warps your perception of the real you.”  The epigram from Susan Sontag is a fine summary:  “Literature needs a lot of people.  It’s enough to honor the project.”  Phillips, himself a gay man and the product of a mixed marriage, who is Professor of English at Washington University in St. Louis has written an interesting introduction, worth reading on its own.  The winner of this annual award is on my reading list for the future.