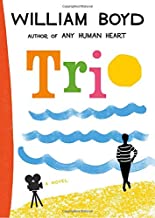 Boyd is the British writer of 16 novels and 5 collections of short stories.  I read his 2002 novel, Any Human Heart, a number of years ago and loved it, so when his new book was published this month and reviewed by the NYT, I grabbed it from the library, a rare treat these COVID days.

It certainly kept my interest, turning more than 370 pages in a little more than 2 days, but I ended up being disappointed.  The eponymous trio refers to the main characters: Talbot Kydd, the 60-something, closeted-gay producer of the movie that is the center of the book, very British and polished; Elfrida Wing, the author of 10 best selling novels who hasn’t written a word in 10 years, is in an unhappy marriage to the movie’s director and who is a seriously addicted alcoholic; and Anny Viklund, the 28 year old American movie star who is having an affair with her co-star, is drug dependent, and is also involved with at least two other dangerous men.

And Boyd does know how to tell a tale, mixing up the characters in a fine brew of plots and subplots that even involve the FBI and Interpol before the three characters achieve some final resolution of their issues.  The book left me a little unsatisfied, though at its heart, I think Boyd was on to an important theme that transcended the action—the unknowability of other people.  At one point, Elfrida is trying to sell a book idea to her agent and points out that “people come to us, us novelists, looking for information about other people.  About all the other people in the world. What we’re thinking, what we need, what we dream about, what we hate. What makes us tick, basically.  People are opaque, utterly mysterious. Even those dearest to us are closed books.  If you want to know what human beings are like, actually like, if you want to know what’s going on in their heads, behind those masks we all wear—then read a novel.”  This theme is echoed by Talbot who while perusing the crowd at a concert at Royal Festival Hall finds himself thinking: “How simply odd other people were, how strange. Sometimes he wished—as if in another world that he controlled absolutely—that people should have labels on their backs describing who they are and what reasons they had for their presence: “Germanophile”, “Failed Artist”, “Bored”, “Classical Music Enthusiast”, “Trying to Impress”, “Aimless Tourist”, “Forlorn Lover”, or whatever. And what would his label proclaim?”  This is Boyd at his best, using his vividly drawn characters to voice his bewildered concern with humanity and its follies.

This is a good book, though not great.

Walking with Ghosts by Gabriel Byrne (#2655)

So Long, See You Tomorrow, William Maxwell (#2657)
Scroll to top