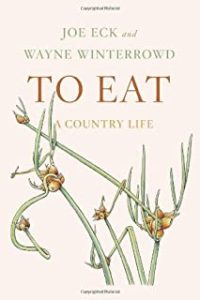 To Eat: A Country Life, Joe Eck and Wayne Winterrowd

Joe Eck and Wayne Winterrowd were two gay men, teachers who met in the 1970’s in a gay bar in Boston who moved to Vermont in the 1970’s, eventually married, and created one of New England’s best gardens, North Hill in Reading, VT.  They have written a number of books about their garden, two of which have been particularly valuable in guiding my thinking about design and individual plants for our Upper Valley garden.  This book was published in 2013, three years after Winterrowd’s sudden death at age 68, and it clearly shows the absence of the element of collaboration between these two gentle souls.  The book is divided into chapters about individual vegetables they’ve grown in their own gardens and includes valuable information about techniques for growing, specific varieties, and even recipes for preparing the crop for the dinner table.  It’s informative and chatty but it lacks the verve and polish of their earlier books.  Nonetheless, for the vegetable gardener in New England, it’s a valuable resource.  We visited North Hill around the time that this book was published, our second visit in several years, and sadly, the garden showed the effects of Winterrowd’s absence.  There was an overall sense of neglect, and when I tried to find the garden on the internet today, there were no entries in Facebook since 2014.  My fear is that Eck, either through physical illness or depression after the loss of his husband, has not been able to maintain this superb garden.  Time, its losses, and nature are inexorable and North Hill appears to have succumbed.  Reading this book was quite bittersweet.