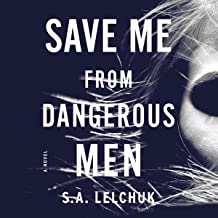 Meet Nikki Griffin, an attractive, educated, erudite owner of a used bookstore in Berkeley, CA that serves the university community.  This mild-mannered young woman, however, has several unusual ‘hobbies’.  First, she moonlights as a private investigator largely accumulating evidence for women of their husband’s misdeeds for use in divorce settlements.  More unusual is her sideline of helping young women by ‘saving them from dangerous men.’ What began as a volunteer effort at a domestic shelter eventually morphed into vigilante action in which Nikki uses physical attacks and firearm-backed threats to convince abusing men that they should not just leave their victims alone but never go near them again.  This all seems quite violent until Lelchuk ratchets it up even further by having Griffin get involved with a Silicon Valley company that is worried about an employee stealing secrets.  The plot is too ridiculous to detail here, but the number of bodies that pile up due to Nikki’s fisticuffs, kicks, and various hidden weapons that she has secreted around her body is impressive.  One does get a bit bored and tired of her managing to get out of situations that appear to be likely to be 100% fatal for her, but that’s the way this book goes, right up until the 324th page.  Anger management is a major issue for her, though the author does provide a pretty iron-clad excuse.  This book, written by a Dartmouth grad and a male who hides his gender  behind the initials he uses in his pen name, is fine fare for the hammock at pool side, but not likely to win any major awards.