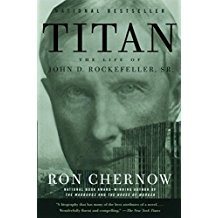 My interest in Rockefeller was piqued when we toured his Westchester County retreat, Kykuit, this summer, so I turned to this massive, 1000 page biography by the author of the recent biographies of Hamilton and Grant.  What an impressive book and what a fascinating character, John D. senior was.  Born in 1839 to a pious Baptist mother and a totally amoral, bigamist, patent medicine fake doctor, Rockefeller lived his early years in a series of upstate NY towns before the family moved to Cleveland.  With his father absent much of the time and eventually totally gone, John was heavily influenced by his mother’s Baptist faith, an influence that dominated his life.  He never attended college but went from a business school where he learned bookkeeping to a Cleveland firm that specialized in buying and selling commodities and rapidly rose to become a partner.  His business career was off and running and by his late 20’s he had determined that the discovery of oil in 1859 in Western Pennsylvania by Edward Drake was going to change the world.  Within a few years, the company he founded,  Standard Oil, had a near total monopoly over refining, shipping, and selling kerosene, the primary product of oil before automobiles and the major means of lighting homes and businesses before natural gas.  It was Rockefeller’s methods of moving from a chaotic, disorganized, overcrowded industry to a near total monopoly that dogged him for life—squeezing competitors by selling at low prices, creating secret rebate systems with railroads, forcing competitors to sell, all resulted in his having a reputation for a brutal, no-holds barred business strategy.  Whatever the morals of such an approach, it was incredibly effective and by the age of 50 he was probably the richest man in the world.  His annual income was more than $55 million from dividends alone and his  total net worth approached $1B dollars in those days before income, gift and estate taxes and before the anti-trust initiatives of Teddy Roosevelt and the Sherman Act in the 1905-20 period.  The other Rockefeller portrayed in the book was the man who felt that his wealth had been God-given and done so in order for him to help others.  He never lost his commitment to religion, attending Sunday services and teaching Bible classes well into his ’90’s.  He never smoked, drank, danced, or spent his money on ostentatious homes or personal items.  Rather, he created an incredible series of philanthropic initiatives including the founding of the Spelman College in Atlanta, the University of Chicago, and the Rockefeller University which totally changed the approach to medical research.  There were also the foundations which eliminated hookworm as a scourge in the South, one which addressed high school education in the South, and on and on.  Over his lifetime he gave away more than $500 million.  The book goes on to detail the lives of his children and grandchildren which are fascinating in their own right.  This is a great book for anyone interested in US history or business or philanthropic history from 1880 to the present.

The World in a Grain: The Story of Sand and How it Transformed Civilization,...
Scroll to top