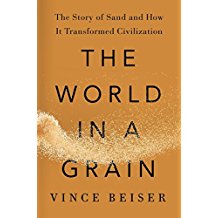 The World in a Grain: The Story of Sand and How It Transformed Civilization, Vince Beiser 2018

A fascinating book about how recent population trends are depleting the world’s supply of its most abundant mineral, silicon dioxide, or sand.  Who knew that there were so many different kinds of sand and specific uses for each kind!  There are the rounded, tiny granules of desert sand which is not useful for construction or building land due to its inability to bind to each other. There are the fine, pure quartz crystals used for glass. There are the super pure (99.999999999% pure!) quartz granules used for semi-conductor chips in our computers and smart phones.  There’s the rough, angular construction sand used for concrete and asphalt, and its this stuff that is disappearing faster than it’s being replenished by erosion of mountains.  The world’s population has swelled to 7.5 billion and is expected to reach 9.0 billion in a couple of decades, and more and more of those people want the homes, roads, bridges, and other amenities of the American life-style.  That has resulted in sand being mined from legal and illegal sites at an unsustainable rate far higher than anytime in history.  Beiser has done a serviceable job, but the overwhelming numbers and side stories he introduces were a bit exhausting and detracted from the overall experience.  Also, he admits that there is no simple answer to solving this problem, but then proposes the Utopian ideal that we should all live more simply—one car, smaller homes, etc.  Not going to happen, so I’m adding the disappearing sand crisis to my daily list of worrying.