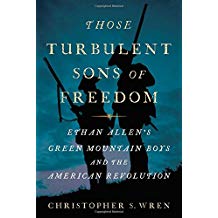 Wren is a former New York Times foreign correspondent who wrote a wonderful book several years ago about his walk from Times Square to Fairlee, Vermont which he made to mark his retirement.  Since then he has evidently used his ‘free time’ to dig into obscure newspapers, private correspondence, and state and town records to tell the story of the American Revolution’s northern theater.  Beginning with the first shots fired at Westminster, Vermont in March, 1775, several weeks before the battles at Concord and Lexington and continuing with battles from Fort Ticonderoga to Bennington, the courage and steadfastness of  Vermont’s farmers and tradesmen were critical to the success of the Revolution.  By defeating the British at Bennington on August 15, 1777, the invasion of the fledgling nation from Canada was halted and Washington was free to focus on Brooklyn, Trenton, and eventually Yorktown.  We learn about Ethan Allen, his younger brother Ira, and his cousins and friends as they turn from their fields and take up arms against the Redcoats, the 4300 Hessian mercenaries, and their Iroquois allies.  The backdrop for this ‘foreign’ war was the conflict between New Hampshire and New York over the land grants that eventually become Vermont, an independent nation from 1777 to 1791.  The Vermont constitution adopted in our neighboring town of Windsor in 1777 ended adult slavery, extended the vote to men who didn’t own land and created public schools in every township.  For nearly 15 years it was unclear whether Vermont would remain an independent country, rejoin the British empire, or be invaded by the U.S. whose Congress dominated by New York threatened to retake the land grants made by New Hampshire in the mid-1700’s.  The uncertainty was resolved when Vermont adopted the U.S. Constitution and became the 14th state in 1791.  In a little known foreshadowing of the trouble to come, Vermont’s entry was paired with Kentucky’s entry as the 15th state, a slave-holding state as a concession to the South.  This is a fascinating book filled with such details.