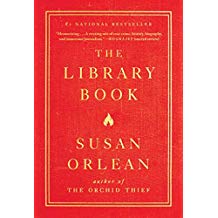 Orlean has written a fine book which is encyclopedic in its breadth and detailed and quite gripping in its depth.  Beginning with the devastating fire at the Los Angeles Library in April, 1986 that destroyed more than one million books and closed the building for seven years, she follows several interdependent story lines, taking the reader back to the great Library of Alexandria in Egypt and then up to the modern, internet-connected public library.  Along the way she dives deeply into the 150 year history of the LA Library system and follows the twists and turns in the fire, its aftermath, and the investigation into its cause.  If this sounds complicated, it is, but Orlean pulls it off with panache.  Along the way you meet fascinating people from both the past and the present—Directors of the library from the 1870’s to the present, men and women who work in today’s LA Central organizing maps, musical scores, playbills, and books while answering thousands of questions on the phone and managing the increasing population of homeless individuals who rely on the Library for shelter and help.  You also meet the firemen who spent hours fighting this inferno, the arson investigators who sought the cause, and the part-time actor who was arrested as the arsonist only to be released and die of AIDS a few years later.  This is a fascinating look at the library of today and yesterday.  If you like books, libraries, or just good stories, you’ll enjoy Orlean’s book.  The Washington Post named it to its Ten Best list and the New York Times made it a Notable Book.

Howard’s End Is On the Landing: A Year of Reading From Home, Susan Hill...